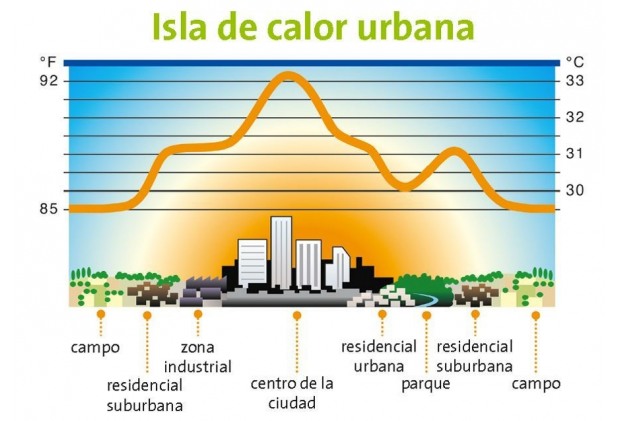 One of the global challenges is the migration of the population to the cities and how they can manage the new demographic scenarios, which increasingly stress the seams of the economic, social, infrastructural, urban, mobility, energy and climate models. One of the effects derived from urban agglomerations is the appearance of the so-called "heat island effect". The loss of natural soil and predominance of asphalt, the massive use of motor vehicles which, after all, are thermal machines, the use of absorbent construction materials and the omnipresence of air conditioners means that the average temperature of cities is several degrees higher than other more rural areas despite sharing the same climate. This is the so-called "heat island effect". During the day, and with insolation, the heat accumulates and is released partly during the night, preventing the temperature from falling, accumulating more heat the next day in a cyclical manner.
The individual air conditioning units are especially unsupportive, because they transfer the heat from the interior to the external environment, so that the more heat it makes, the more it works and the more heat dissipates the environment, overheating it and unleashing a perverse vicious circle. This is not the case with district cooling networks. District cooling networks produce the cold centrally and usually separated from the population centers but, in addition, on numerous occasions they condense their equipment using river water (as in the case of Districlima Zaragoza) or sea water (as in the case of Districlima in Barcelona), thermally unlimited means for these purposes. If, in addition, they produce cold during the night (when the ambient temperature is lower) and accumulate it in water stratifying tanks or in the form of ice, the use of production equipment during the day is still lower.

This contribution of district cooling networks is reflected in objective values: Tabreed, giant of the sector of which the ENGIE Group participates in a 40%, has studies that show that the ambient temperature of the city, the "island heat effect", is 1 to 2 ºC lower in case of the existing network of district cooling instead of the hundreds of air conditioners that are replaced. Similar values are obtained in the Climespace network in the city of Paris.